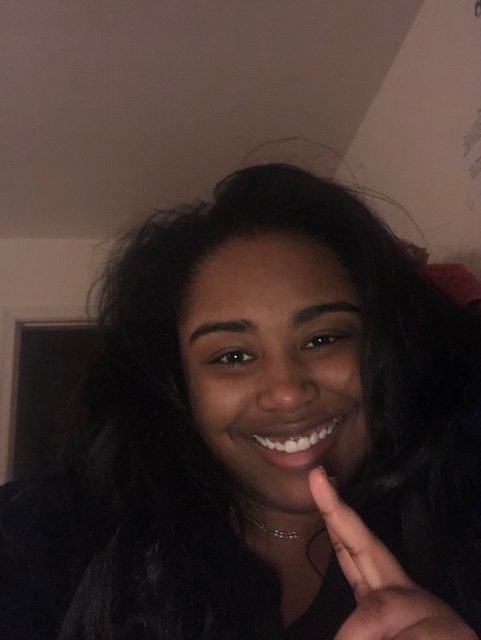 The Answer is Now
by Riv Lobban

I always thought of myself as a confident, empowering person.

However, my mind always tends to block out the journeys I took to get there.

Being outspoken is in my blood. It is part of my DNA. I cannot remember one day in my short life where I never had something to say. Saying those opinions were a different story. Being labeled as “sassy” by teachers who aimed gendered racism towards Black girls like me made it hard to say anything. Parents, family members, and other adults, whether they cared or not, found it easier to shut down my “disrespectful, fresh, and unnecessary crap” because of my age. Notice,it had nothing to do with right or wrong, because then the battlefield would have become truly equal.

I did what any good girl did. I hung my head low, said sorry, took the berating, and internalized it for most of my childhood. From there, I learned what to say, when to say it, and how. I learned the types of smiles that would lead me to opportunities and which ones made people uncomfortable. I learned the rules better than most people my age. It was for social survival, as student, a girl, a child straddling African-American and Caribbean multiverses, and man was it…man was it…full of crap!

No one goes through this life without having meltdowns, their own opinions, and fighting with their parents because of the previous two reasons. Telling the truth hurts everyone, including your own family. For some reasons unknown to most of humanity, the same people who raised us to be independent thinkers end up being the most horrified when we act as such around them. That’s hurtful, because now the children believe that their parents never raised them to be actual people. Functioning robots that take commands fits the mission description more accurately.

I am writing this as a college student who has seen people come and go without much thought to the person they left behind and their tears. I am writing this as a girl, realizing that becoming a woman is more than just wearing bras, having a body count, or having connections to the coolest parties on the block. I am writing this as someone’s daughter, niece, granddaughter, cousin, and sister whose name carries just as much clout if not more. And before I finish this, I want to let every person reading this to know that it is more than okay to step into your own. You only need your permission. No one else’s is required. Our parents, friends, romantic partners, mentors and religious figures, they are only individual parts of what makes up your life. The thing is, you make up your life. The sun does not rise and fall on anyone or anything except your will to live. The level of autonomy you have over your life is determined by the little choices you make along the way.

You are to respect the people who came before you. No matter how young and free we are now, this generation will need that reverence as we get older. It only makes sense to give it out in return. The worst irony is that they are hard on us because they know just how hard life can and will be. It does pay to listen to their wisdom considering it can save a life. It could even help you start a better one for you.

Getting that well-paid job, awesome apartment, and finding the buried treasure of our childhoods is not as far off as people make it out to be. Be persistent enough and that millionth application will be the key to your job. Keeping your nose in a book just might motivate you into writing your own. And all those nights, with your tirelessly working on that laptop, crafting game-changing emails, and hitting the bed as the sun rises? Nothing changes the fact that it sucks now but the endgame will be much sweeter.

Take a few minutes to breathe. Sit still. Feel yourself becoming your own person. When you’re ready, ask yourself, “What do I want, and when will I give myself the permission to go after it?”

Hopefully the answer is now.

4 thoughts on “The Answer is Now by Riv Lobban”