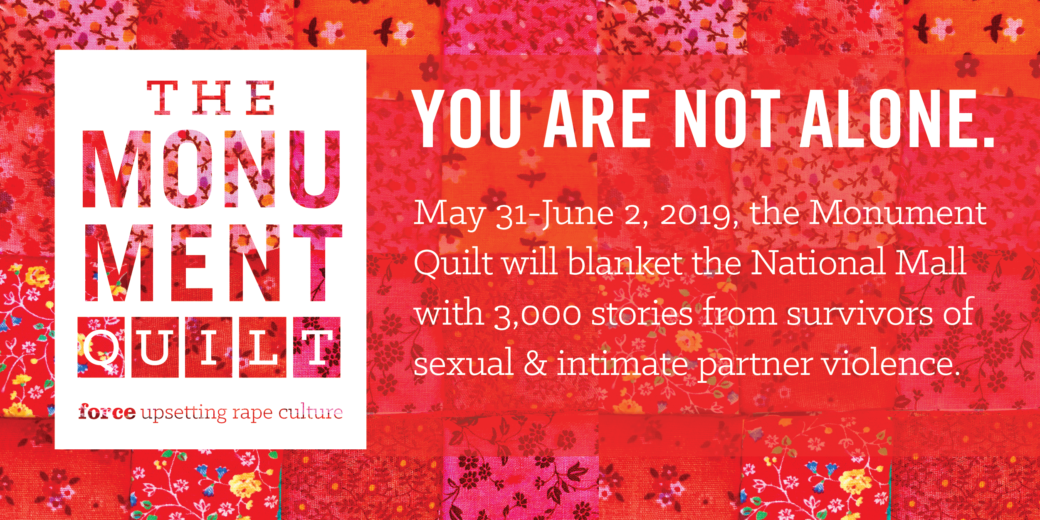 (CW: This post and the Quilt address rape, assault, and abuse.)

For the first time ever, The Monument Quilt, a public art project made by and for survivors of sexual and intimate partner violence, will be on national display as it blankets the National Mall in Washington, D.C. In its largest display, this event is the culmination of five years of local, national and international organizing to have survivors and supporters create more than 3,000 quilt squares each 4’ by 4’. Spanning 2,000 feet, or four football fields, the Monument Quilt will spell out NOT ALONE and NO ESTAS SOLX (Spanish for “not alone”). More than 100,000 people are expected to attend the historic event, on the Mall between 10th and 15th Streets. This event, from May 31-June 2, 2019, is the only time the Monument Quilt will be displayed in its entirety.

There has never been a monument dedicated to survivors of sexual and domestic violence this large and with this many participants.

“Survivors need to see public support in order to counter the public shame, blame, and violence they face when they come forward with abuse,” said Lorena Kourousias, FORCE. “The Monument Quilt creates a meaningful opportunity for our culture to honor those whose traumas are the threads of our nation’s fabric, and whose stories deserve to be heard.”

The three-day event is open to the public and will feature art-making, performances, speakers, workshops, and a public healing space. Organized by FORCE: Upsetting Rape Culture, the Monument Quilt display is bringing a space dedicated to survivors’ healing, along with their personal stories, to the national stage during this particularly pivotal time in U.S. history.

“The Quilt will occupy this national site to demand that our country face the realities and complexities of sexual violence and finally demonstrate real support to victim/survivors,” said one of the organizers Kalima Young. “Every attendee and every person affected by sexual and intimate partner violence will finally hear the message: You are not alone. We believe you. You did not deserve it.”

The Monument Quilt honors and centers the stories too often left out of public conversations of sexual assault and domestic violence, including those of Black women who are criminalized for self-defense and Native survivors whose search for justice is entwined with tribal sovereignty. Dedicated to all survivors, and those who did not survive, pieces of the Quilt memorialize transgender and non-binary people whose lives were taken by violence. Other pieces share stories from immigrant, LGBTQ, and male survivors of abuse and sexual violence.

“I am part of a men’s survivor support group and we made a quilt square together. You don’t often hear a lot about us, but men can also be victims and survivors. I came together with other male survivors from intimate female offenders in true brotherhood, healthy masculinity and love to express our journeys while creating a quilt square,” said Norwood Johnson, who is one of the organizers of The Monument Quilt.

Since the project began in 2013, individuals, collectives and groups around the country have contributed their personal pieces to the project. Each of the 3,000 quilts is a handmade work of art. The Quilt’s growing collection of stories has been displayed 49 times in 33 cities across the U.S. and in Mexico. FORCE created a digital library cataloguing each square by number, which will be accessible at themonumentquilt.org/view, so people can track their artwork.

After the exhibition on the Mall, individual squares of the Monument Quilt will be distributed to libraries, school, cultural institutions and anti-violence organizations to be housed in permanent collections and displays, as a living archive of the project.

The Monument Quilt is the project of non-profit organization FORCE: Upsetting Rape Culture, a national art and activist collective based in Baltimore, MD. With a network of hundreds of dedicated volunteers from around the country and a small core staff collective, FORCE creates large scale public art actions to change the conversation around rape and abuse in this country to a more difficult and honest one, demanding we all consider what it would take to create a world without rape. Learn more at www.UpsettingRapeCulture.com and www.TheMonumentQuilt.org.

For immediate crisis and to access therapy and other resources for victims and survivors of sexual and intimate partner violence can access their state Sexual Assault and Domestic Violence coalitions, or call the RAINN National Sexual Assault hotline: 1-800-656-4673.

*About our choice of the word “Survivor”: No one word can define the realities of every person affected by sexual or intimate partner violence. The best way to identify someone who has been assaulted or abused is to ask for, and use, the term that each individual prefers. FORCE usually uses survivor to affirm the ability of people to live beyond traumatic events. Victim can also be used to communicate the gravity of traumatic experiences, or for those who did not survive. Victim-survivor expresses the intersectional experiences of Black women and gender non-conforming folks of color who have historically never been seen as victims in the eyes of culture, community, or the law.

Thank you Push to Start for sharing this release with MissHeard Media. All images from themonumentquilt.org.