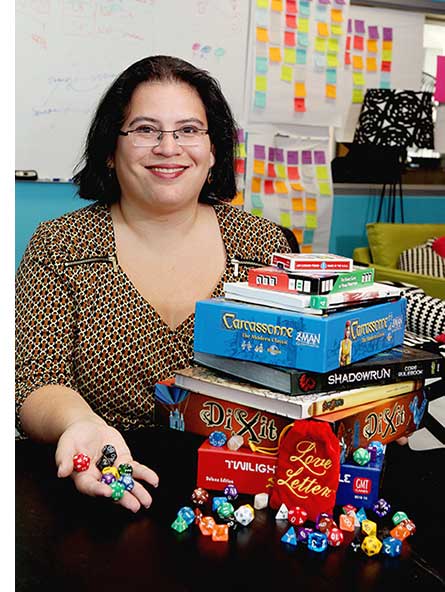 PhD, professor, and video game designer Jessica Hammer started making games when she was a kid, throwing parties for her classmates. She used her game-making skills to entertain her charges as a babysitter and youth leader.

In college, her dad urged her to try computer science, and after almost failing her first course, was determined not to let CompSci beat her. She persisted, falling in love with the field. From there, Hammer taught STEM to girls, and eventually found her way into designing fun games.

Hammer believes that games can be a way to change and understand cultural narratives. Games, according to Hammer, can make people more empathic. How cool is that?

Hi Jessica! How did you first become interested in video games, and studying video games?

I started designing games when I was in fourth grade. I would offer to create custom birthday party games for my friends. When I got older and started babysitting, I invented games for the kids I worked with. At the time, I didn’t know it was an actual job you could have. I just thought it was fun to invent new games, and to watch people play them. I didn’t start making or studying digital games until after college, but it turns out that creating lots of prototypes and carefully observing gameplay are skills that help you no matter what kinds of games are involved.

How would you describe yourself in 3 words?

One way that games can change people is through vicarious experience. Vicarious experience means you can learn from the experiences you have in a game, even if you also know they aren’t real. For example, you might get to experience what it’s like to immigrate to a new country, have a child, survive a war, or become the supreme ruler of the world.

Even if none of those things ever happen to you-the-player, the experiences of you-in-the-game can stay with you, and inform how you think, feel, or behave. But, the key to effective vicarious experiences is reflection. Not everyone makes the connection between game experiences and experiences that they might have in real life; thinking and talking about games solidifies the meaning that games have for us outside of play. That’s why it’s so important that women not just play games, and not just make games, but also participate in the public conversation about games.

Why do you think women and girls are so often left out of video game creation, media, marketing, etc.?

Video games haven’t always excluded women. Some of the most important early video game designers were women (like Roberta Williams, Danielle Bunten, and Dona Bailey) and ads from the period show lots of women playing. In the early eighties, though, there was a backlash against the feminist advances of the previous decade.

As it became clear that computers would shape the future, men pushed women out of the field across the board, from computer science programs to the video game industry. But, women have done an incredible job reclaiming our place. From women-led groups like Pixelles to industry thought leaders like Margaret Wallace to brilliant designers like Mitu Khandaker, we are seeing a renaissance of women making, thinking, teaching, writing, and leading in games.

How does greater representation of women and girls in video games improve the industry?

There’s research showing that groups get smarter and more creative when more women are involved. So, an easy way to make better games is to have more women in the room making them! But as a professor, I’ve also seen hundreds of brilliant, inspiring, unique games from my female students. When we elevate the creative voices of women and girls – especially women and girls who might be marginalized for reasons other than gender – we’re going to get amazing new games we’ve never seen before.

What are your personal favorite video games?

A game that’s been really important to me for a long time is Angband. It’s a Tolkien-themed text-based roguelike, where you play an @ symbol descending through many dungeon levels to fight Morgoth. Whenever I’m stressed, playing a couple of levels of Angband clears my head!

The game I’m most excited about right now is Breath of the Wild. I love exploring the big open world and finding out what there is to discover. Sometimes I’ll spend a whole play session just catching horses, or climbing mountains, or taking photographs of butterflies.

A game that makes me super competitive is Two Dots. My brother is about five hundred levels ahead of me, and I’m determined to catch up!

Which types of classes or activities should girls focus on if they were interested in a career in games or studying games?

I recommend doing three things. First, have some kind of regular creative practice. That might mean drawing, coding, crafting, you name it! The key is to learn how to finish projects, take feedback, and share what you make with others. Bonus: if your projects include games of any kind, digital or non-digital, you’ve got an instant portfolio.

Second, learn about working with people. You could do this by taking psychology classes, but you can also learn it by doing collaborative projects or by taking a leadership role in extracurricular activities.

Finally, develop a sense of taste and craft. That means playing lots of games (not just ones from your favorite genre or studio), and then analyzing them. For example, you could write about your experiences critically, interview your friends about the game, read critical essays online, and watch videos by game designers.

What is your favorite part of your job?

As a designer, I love watching people’s faces as they play a game I’ve made. As a teacher, I love playing my students’ games and giving them feedback. And as a researcher, I love finding a problem where my expertise in games can make a difference to people’s lives!

Who is your role model?

I look up to Katherine Isbister. Her work is playful and inventive, but also thought-provoking and intellectually rigorous. I admire how she collaborates across disciplines – artists, game designers, computer scientists, you name it. I’ve been lucky enough to work with her and to get a glimpse into her process, and it’s already showing me how I can follow in her footsteps.

Thank you for your time! Is there anything you’d like to tell our teen girl readers that you were not asked?

You can make awesome games even if it isn’t your full-time job. You can prototype non-digital games with index cards and pennies, or use tools like Twine and Unity to build digital prototypes. Then get your friends to play, and watch what happens! It’s really important that just like people paint, or write, or sing, or play in a band, even if it isn’t their job, that we also have all kinds of people designing games in and out of the industry. That’s how you get a healthy game culture.

Read more about Jessica Hammer in this interview from Carnegie Mellon.

Jessica Hammer is an assistant professor at Carnegie Mellon University. She earned her B.A in computer science from Harvard, and earned a master’s of professional studies degree in interactive telecommunications at New York University and a Ph.D. in cognitive studies in education at Columbia University. She studies how games can change the way people think, behave, and feel. Hammer’s role-playing games often ask players to imagine alternative histories or futures.

I Want Her Job: Interview with Ambassador Harriet Elam-Thomas