As the wildfires across the globe ravage land, there is a costly and emotionally degrading side effect that comes with it. Homes are burnt down, pets are lost, and millions of dollars worth of buildings and structures are gone. But no one seems to find the answer to ending these fires or at least controlling them. Or so we thought. An Indigenous practice that has been around for centuries upon centuries may be the answer to these vicious flames, by literally fighting fire with fire.

Jane Robbins is an Indigenous woman from Northern California. She is a talented Yurok basket weaver, and there is more to her than that. Robbins co-founded the Indigenous People’s Burn Network, and its main goal was to set as many forests on fire as possible. Robbins trained her team to light the forests in Yurok, her hometown, on fire. She carefully observes as they carry torches filled with petroleum. She told National Geographic in December of 2020 that “You too can fight fire with fire; There’s good fire and bad fire.” But, how does this work? The biggest problem with our forests is that underbrush grows extremely fast, due to it being a living organism, and allows the embers to catch fire very quickly. Hot, dry, and windy days make it more likely for wildfires to occur. Indigenous people’s idea is to set a perimeter around the forest that burns unnecessary and threatening brush as well as young trees that are at high risk of causing major wildfires. This way, they can reduce the possibilities of fires but still be able to protect their land, homes, and their wildlife.

Although this practice is extremely rewarding for saving precious land, there are many more personal reasons why the Indigenous people do this. For example, the beautiful plants of the forest and terrain will grow back even healthier than what they were before the burn. It is analogous to when people shave their hair off, and the hair that grows back is much healthier. This is because the fire gets rid of any dead or useless plant material, and allows the plant to flourish when it starts growing again. Thinning down of trees also helps to conserve water underground which prevents the more deadly fires and eases water shortages during droughts. Indigenous people have been following this practice to maintain clean meadows that would bring in animals such as deer and elk. They burned material such as undergrowth so that edible plants such as berries would grow back strong. And most importantly, they burned excess forest material to make clear pathways for hunting. Similar practices are followed not just in California, but also in the West.

UC Berkeley’s researchers estimated that almost 4.4 to 11.8 million acres of land get burned every year by wildfires. This is almost 1/8th of the state! In the wet areas of the Pacific Northwest, Indigenous people used to set fire to about 1.6 million acres of land. How do we know that this was truly effective? Scientists examined ancient stumps of trees in the Colorado foothills, they noticed rings of char that abruptly came to an end when US colonists arrived.

“I was burning orchards around eight or so, usually with an elder watching and supervising.” Yurok fire leader Elizabeth Azzur told National Geographic. She explained the differences between a human-controlled fire and a natural fire. People don’t understand the differences. Human controlled fires are low to the ground and burn themselves out due to the humid conditions. Natural fires ravage, burn, and thrive in dry conditions which makes them extremely hard to put out. Elizabeth is a basket weaver, and that thrives her interest in hazelnut. If left on its own, hazelnut grows poorly, into a shrubby, straggly plant. However, if young plants are burned in the fall, strong and straight shoots come up in the fall. Azzur told Nat Geo, “It’s like it changes the DNA in the plant;” The new stems are also perfect for Elizabeth’s basket weaving. The baskets weaved with these roots are so tight and strong that some can even hold water, catch eels, and cradle children.

We have only talked about the pros with this practice, and although the indigenous burn network has a promising future, there can be some cons to it after all. Prescribed burns can sometimes cause out of control fires, because humans do make mistakes. A preventative fire in New Mexico in 2000 consumed nearly 250 homes. Although events like this could happen, the likelihood for it to occur is very low. A study found that out of 6,373 controlled fires, only 112 went beyond their boundaries, according to National Geographic. Firefighters are allowed to create protective firewalls if a raging fire becomes a threat, which is a quick and efficient way to water down the flames in case a control burn starts to spread.

“There is a tremendous body of expertise here, and it should be used,” said John Tripp, a Karuk fire expert. As we search for new, and innovative ways to curb some of the problems threatening our world today, some of the answers might just be right in front of us. As of January 2022, President Biden’s administration has taken a big first step into solving climate change. They funded 50 billion dollars to double the amount of controlled fires happening in fire prone areas such as California’s Sierra Mountains, Colorado’s Rocky Mountains, and even spots around Oregon and Washington. This technique could truly save how our world is responding to climate change. Modern science integrated with the traditional knowledge of the indigenous peoples transmitted through generations could offer many solutions to environmental conservation and management. Revisionist narratives of colonialists tend to undermine and undervalue such practices but the indigenous community and culture is tightly linked to the land and natural resources. Fostering a better understanding of such traditional knowledge could be an inclusive and pivotal approach to battle the challenges of climate change. 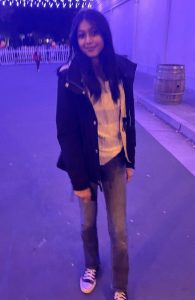 Hi, my name is Nirupama Shivakumar and I am a freshman at a high school in California and a rower for NorCal crew. I wrote this article after observing how some states get so much damage from the wildfires across the country, and how the answer is right in front of us. Studying the National Geographic article on this topic has opened up an array of possibilities to me about how some of the oldest things can solve the biggest problems.