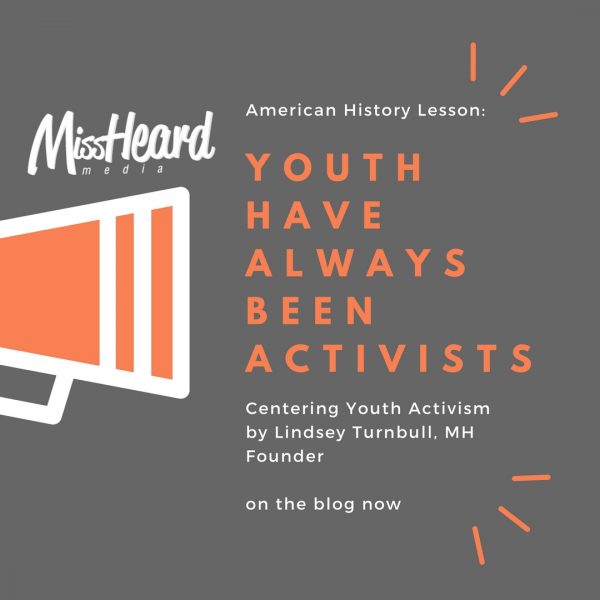 In America, young people have always been at the forefront of activism. From children’s participation in the Revolutionary War, to youth marching for worker’s rights, Civil Rights, immigration, and now gun reform and climate change, it is clear that the youth voice is a powerful force in America.

But, before I get into that, I want to take a minute to honor the 17 lives, traumatically and callously taken too soon, that inspired the latest wave of youth activism. They are:

I can only offer my deepest condolences to the friends and families of these beautiful students and teachers, and it’s nowhere near sufficient. The whole nation mourns with you.

The traumatic loss of life has put the newest wave of youth activists in the spotlight. These youth, survivors of a horrific school shooting, are asking for reforms to gun laws that will hopefully make schools (and churches, and nightclubs, and movie theaters) safer places. Some of these students include incredible orator Emma Gonzalez, aspiring journalist David Hogg, organizer Cameron Kasky, and logistics whiz Jaclyn Corin, to name a few.

For some reason, adults seem to think that youth, especially traumatized youth, shouldn’t engage in politics, organizing, or meaningful leadership. However, at MissHeard, we have always known, have always fully believed, that young people are capable, smart, and powerful. Armed with their stories, and empathy, connected to the universe via cell phone, today’s youth are more engaged and connected than ever. In some ways, today’s youth are more equipped than ever to turn their trauma into action. They’re going to make change, in some cases, before they can vote. (Although, many of the leaders of the Parkland movement are already or will be eligible to vote in the 2018 mid-terms.)

On March 15, 2019, youth across the US will be striking for action on climate change. Swedish teen Greta Thunberg, inspired by the Parkland youth, began her school strike August 20, 2018 because she fears that the effects of climate change will be so damaging that she and other teens will not have a future.

The teen traveled (by train) to the Davos Economic Forum to deliver honest, candid remarks to many in attendance: “some people, some companies, some decision-makers in particular have known exactly what priceless values they have been sacrificing to continue making unimaginable amounts of money.” Greta has inspired youth including Jamie Margolin, founder of This is Zero Hour, and other teens across the US who fear that inaction on climate will leave them without a future.

Teenagers have founded multi-million dollar companies, made scientific breakthroughs, and founded community-changing nonprofits. The reality is this: Teenagers have been shaping the US since it’s inception.

Here’s another thing to consider: the concept of childhood is a pretty new invention. In the 1600s, in England and the colonies (ie, America), children aged 9 and 10 could marry, 14 year olds could sit on juries, and 5 year olds could sign apprentice contracts that lasted until they turned 21. Children could even inherit their parents titles; 40 young men under the age of 21 served in Parliament in the 1660s. Children in rural and lower income families have always been expected to work (often in very dangerous, dirty, and low-paying jobs) to sustain the family. Our concept of childhood didn’t really emerge until the late 1800s- and even then, not all children were privileged enough to enjoy a “carefree childhood.”

Youth involvement in America started early! Boys under the age of 16 acted as fife and drum corps in the Revolutionary War. Boys older than 16 were soldiers. Boys and girls, with their seemingly innocent faces, acted as spies for the British and American armies. Although girls were less active on the battlefield than boys, girls managed homes and farms while their brothers and fathers were away. 16 year old Sybil Ludington, known as the ‘female Paul Revere,’ rode 40 miles to warn soldiers of a British attack. (Hrmph, Paul Revere rode 14 miles, so maybe he should be known as the ‘male Sybil Ludington.’) Other girls cross-dressed and joined the army to fight. Teens have always been a part of American history, even if they are not as visible as adults.

Teens marched for Suffrage, walked out for worker safety during the Industrial Revolution, fought for Civil Rights, marched against war, fought for immigration reform, and more. As a thanks, teenagers have had dogs let loose on them, have been sprayed with fire hoses, and even accused of being “paid plants.” The struggle between motivated, engaged teenagers and the adult establishment is not new!

In 1911, the Triangle Shirtwaist Company in NYC burned down, killing 145 mostly teen workers- in large part because safety features were not in place. Many workers were locked in! Nearly all of the employees were teen girls, many immigrants, working 12 hour days. When the fire started, some girls jumped from the building, rather than burn to death. The workers union organized a march attended by 80,000 people. Although the factory owners didn’t face criminal charges, the city did enact reforms like mandating sprinklers and marked fire exits, to prevent similar disasters. Additionally, support for women suffrage increased.

“Although I’m only fourteen, I know quite well what I want, I know who is right and who is wrong. I have my opinions, my own ideas and principles, and although it may sound pretty mad from an adolescent, I feel more of a person than a child, I feel quite indepedent of anyone.”
― Anne Frank, The Diary of Anne Frank

Youth were at the forefront of the Civil Rights Movement as well. The fight over integrating schools centered on children- of course youth were active! The Little Rock 9 enrolled in an all-white school in the South, facing harassment so vile the children were escorted by the US Army’s 101 Airborne Division, and backed by 1,000 paratroopers. Six year old Ruby Bridges was the first black student to go to an all-white school, where she too was escorted by US Marshals. A SIX YEAR OLD CHILD was the subject of violence and harassment- no doubt this was traumatic.

Youth have always been at the forefront of American political change. Youth marched in the Birmingham Children’s Crusade- some of them in elementary school. During the 1963 march, 500 kids were arrested and crammed into cells. The protesters caught the attention of then-President Kennedy and local police, who used police dogs and water cannons to stop the marching children. The Crusade eventually moved JFK to support the Civil Rights movement.

Youth, especially black and brown youth, are at the forefront of American political change because their lives and safety and well-being depend on it.

A common thread in protesting is that it takes time. Florida organizers were dealt a loss in the Florida House, which refused to even hear a bill that would restrict automatic rifle access. To this, I would suggest: keep marching.

Worker’s rights didn’t come all at once, and not after one march. Women didn’t get the right to vote after one small campaign. The Civil Rights movement took multiple marches, countless hours organizing, and physical and emotional trauma. Teenagers and adults organized for immigration reform in 2013, and we still don’t have answers.

We have to be the adults in this situation because clearly people have us failed us in the government, and we must make the change now because we’re the only ones who are going to. – Jaclyn Corin, via Time

Keep marching, youth activists. Keep your chins up. And above all, take care of yourselves and each other.

At MissHeard, and across the world, adults believe in the power and potential of teenagers. Adult decisions very much affect teen lives, and I believe you have the right to express yourselves in many forms- including politically. While youth protesting isn’t new or even novel, it is necessary. You are our future and you are our present. I encourage you: raise your voices, raise your fists, be visible. If marching isn’t for you, that’s OK too. There’s plenty of behind the scenes work to be done, plenty of letters to be written, phone calls to be made, support to be offered. (And please, take the support offered!)

Above all, let your passion and your sense of justice guide you. The moral arc may bend towards justice, but it takes all of us.

The Unfinished Revolution: Children’s Rights and the American Revolution

One Road to Character

Youth in the Civil Rights Movement

This is Zero Hour

We Wouldn’t be America without student activists