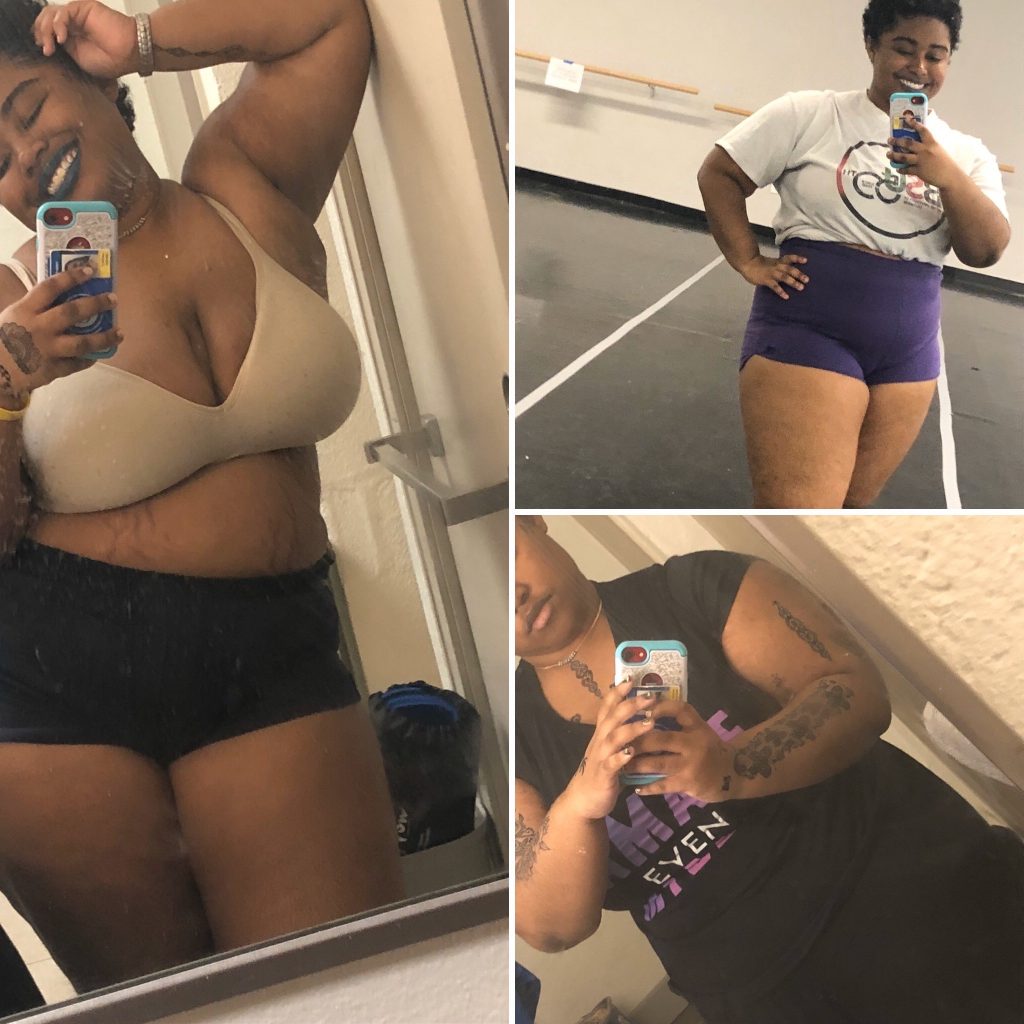 A Seven Year Nightmare:
The Journey of Finding and Freeing Myself
by Riv Lobban

TW: This article contains brief descriptions of abuse that may be upsetting to some readers.

Most of you know me as a seasoned MissHeard Media Teen Advisory Board Member who writes articles and the occasional audio essay. But today my lovelies is storytime.

My name is Jourdan Lobban. I am a sophomore undergraduate student attending University of Delaware. I identify as African-American and Afro-Jamaican, have three majors as well as three minors, and listen to folk-hop-and roll from Judah and the Lion as much as Run-DMC classics. Most thought that I lived a cushy life, with everything I needed and more served on a daily silver platter. But nothing is ever what it really looks like, and I paid my dues until it was time.

Once upon a time, a little girl was whisked away to Delaware with her loving mother and father. She was favored by all, her family, her church, teachers, and even strangers! She was smart, talented, composed, articulate, and had her head in the clouds all day. She was given all she ever wanted, from clothes to food to the latest movies released on DVDs. And no one loved her like her mother, who went as far to be her very best friend. Most who met her complimented on her gifts from heaven above, and she relished in the spotlight that was simply given to her.

But behind closed doors, a darkness was locked away, only to come out when only the few were there. The pressure to be perfect, to be a good girl was always at height. Punishment was sure to follow if not met, be it in the form of a belt, yelling, and complete destruction of innocence. The little girl believed it was all for her benefit, for she was a bad little black girl who needed to be corrected. It was all she knew, and there was no fighting a system of oppression from all sides. So took it she did, from her parents, her teachers, and many of the other adults she put her trust in.

Even with this darkness, there was enough light to keep the child secure and happy. Life had a way of doing that, giving people enough distractions from the very things that must be confronted at some point. For the little girl, her bubble of good fortune was popped upon the death of her mother. And with the passing of her spirit into the unknown afterlife, went a knight, the fierce protectiveness of black mama, the only Jesus Christ her daughter ever knew. It was the first of many cloudy days. It was the beginning of the seven year nightmare.

The camelot of her home, the castle she had grown up in, crumbled all around the little girl. From all over, she was at times told she was not a little girl anymore. She was instead a grown-up, but only when her feelings were invalidated for being “too sensitive” and was not nurtured as she should have been. Other times she was a child, and only when it was time to keep her mouth shut and do as she was told.

Her father, lost without his black queen, was unable to keep his dark sides at bay. The daughter became keeper, the tamer, but her wounds from battle with the man who was to be her knight grew heavy and could not heal in time before the next session of blows. He was her source of pain as much as her source of joy. And she would go to war for the man who had no real promise of being the father she truly needed him to be. In school the girl was ignored, bullied, harassed. The little girl never knew when she would be beaten, abandoned or accepted by the ones who surrounded her, stranger or loved one. She had to keep her own demons buried beneath, for when they came forth, she was held down and caged away like the beast they saw her to be. Church was about God, not the hidden lives of girls like her who were preyed on by the leering men and how they were discarded like unwanted rags by their women. Her anger, sadness, and grief were taken to be madness with criminal agenda. Her brown skin and female genitalia made her into an amorphous being that was seen as anything but innocent, broken and in need of care. No matter where she traveled, how far she ran from the darkness, it always called her to its home, forever intent on swallowing her with perverted satisfaction.

Time passed. Seasons changed. Everyone grew up…except for the little girl. She was stuck in one moment, or moments of pain that deliciously held her captive. She was taught to be a glass figurine, wearing the finest clothes and jewelry with a full belly so as to appear rich. No one knew of her bouts of breakdowns. No one knew her being habitually suicidal. No one dared challenged her father, who could easily switch between a knight that favored her and a dragon that breathed fire into her face, pushed her away, and left the princess to her own devices. And for each time good fortune was spilled from the God she prayed to, ten more years of joy was snatched from her grasp.

College gave her bliss. On the outside, a young adult. Yet, on the inside the twelve-year-old had not moved into the future like anyone else. Freedom, new challenges, and new rules overwhelmed the little girl. She learned, she maneuvered, and found a sense of, dare I say, escape. Maybe, the “f” word. But as soon as she touched it, it was taken away with little regard for her happiness. News of her deteriorating home being taken away crushed her like a rock being dropped on her heart from the inside. The screaming began again, but no one was in the mood to care to even hear her. From moving all her belongings in haste, to securing a space with a family less known to her than the land around her, the little girl was once again trapped. The family she lived with, including hers with the once king, mirrored one another in bitterness, abuse, apathy, and self-hatred. Dissociation was high, projection of negativity was the real religion, and the reggae playing in the background was a cold irony laughing at the cruel reality of it all.

And at the first sight of a chance to escape, the little girl took it.

She had no home to go back to. She was placed in a dorm that had seen many better days. There was homework to be done but always piled higher and higher. Depression, anxiety, and suicidal thoughts came and went like the lover who always kept their promises. Job opportunities died with each time an interview was missed. Friendships that were formed in cool mornings could not survive the succession of storms that followed at her side daily. The castle was gone. The dream was long dead. But no matter where she went, the touch of destruction flowed endlessly from the little girl’s fingertips.

Then, on many different sorts of “one days”, the little girl decided to find a way to end her story, with a new beginning.

See, she had been telling her story with the same beginning, middle, but no climax or resolution in sight. Therefore, no change was happening. And it was not going to come from her father, who clearly demonstrated that he would never truly change. It would not come from the religion that was used to control her rather than support her. And it would not come the wrong friends too busy for her well-being, or boys who were more shameful ghosts than men.

No, the change had to start from inside of her.

It would take a laboring season for the change in the little girl to manifest. She realized that her mother, once thought to be her first savior, was not going to come back and save her. She then had to lose many people, and how she grieved at the thought of yet more loss. She had to gain the courage to cut off the very people who only could hurt her and never support her, including those she had called family, the men she deemed loveable, and a father who was once her world. She left behind the churches that silenced her cries for a help that could never come from any deity. She said goodbye to the god that owned her more than anything. And through reaching out to new people, journaling, endless searching for the right Black, woman therapist, and carrying her bags of heavy groceries up flights of stairs, the little girl began growing from the inside. No longer was she going to stay stuck in the timeless period of the nightmare. Not only was she finally growing up, but she was finally moving forward.

And now, four days until the new year, the little girl is not so little anymore. She is slowly catching up with the moving world, and has made great strides in such short time. Somehow she was able to pull off attaining a near 4.0 GPA, with the gift of advocacy from many people of course. She knows how to manage money a little better, and makes sure to have enough for food and other things. She doesn’t allow anyone with negative energy into her life, not matter how convincing their covers are. And no man will come into her space unless he knows how to be a healthy addition, not a waste of space, in her life.The now grown woman realizes she is a Goddess with an edge, a bad bitch, and a queen who can survive on her own, with friends/chosen family to help her and love her the way she needs to be, and is currently preparing moving into a new (and better) digs.

That little girl, that woman, is me.

My name is Riv Lobban. And after seven long and lonely years, I am finally free. And this was after learning that I am the savior I had always prayed for.

Be sure to check out my upcoming literary journal-drumroll please…drrrrrrrrrrrrrrr- Nightmares are Dreams!

It’s an up and coming publication dedicated towards allowing creators to explore the depths of the light and dark in our lives before finding the balance in everything, especially within ourselves. Free everything, dive deeper than thought possible, and if there’s a no, definitely ask “why” or “how come”. And this is all within a safe, inclusive, encouraging space. I only hope to help create a family that we all need no matter where we are in the journey. Shoot me an email or dm with the links below about how you want to contribute ( I need staff members ASAP!) and click the link if you’re ready to submit your work!

3 thoughts on “A Seven Year Nightmare : The Journey of Finding and Freeing Myself by Riv Lobban”