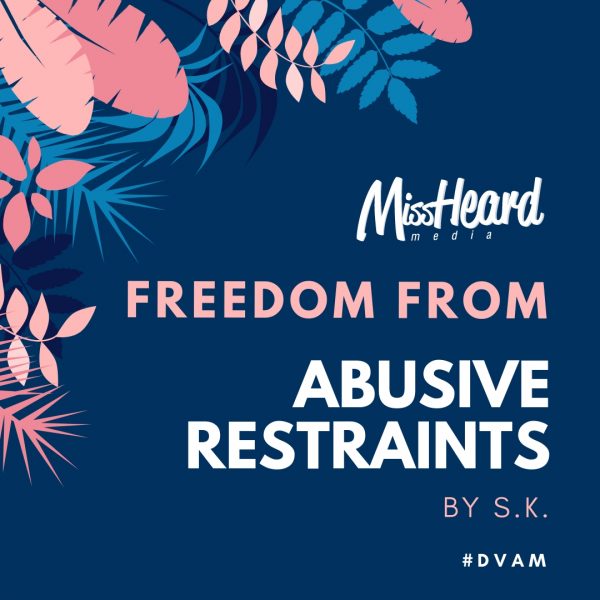 Freedom from Abusive Restraints
by SK

I am a child of an immigrant single parent, who came to this country to escape the inequalities within her home country. My mother is originally from India. In India, women are forced into arranged marriages at a young age, forced to obey their husbands, forced to be the sole caregiver at home, and basically forced to endure all types of abuse at the hands of family. These are only a few of the old-school gender conformity ideals that are still stuck in Indian society. My mother was treated no differently than how the culture treats women. When it came time for her to embark on a new journey, she fled for the United States of America seeking freedom from all the torture. However, when she got here, freedom was far from what she got. My mother ended-up living with her uncle, who had almost identical cultural and gender conformity ideals as many Indians. Her uncle was also abusive, and my mother was miserable.

All my mother wanted to do was to break out of this cycle of abuse and get the freedom she believed was so rightfully deserved. After going through all the torture and abuse, freedom did not seem close in sight. My mother continued with her life struggles and her quest to attain freedom. Shortly thereafter, she had me. Some say having children is liberating, and others say having children is binding. I believe that the reality of having children depends on the person.

When I was younger, my father abused me as well. When I was around 10 years old, I finally decided to breakout of the vicious cycle of abuse for myself. After my father pushed me down the stairs, I had an internal fire burning with rage. It was a fire of anger and courage that continued to grow. I wanted to be free from all the abuse. So I picked up the phone. I had enough of the abuse, and it was time for me to stand up for myself. I dialed 911 for my safety at the time, and reported the incident to the police. They showed up at his house, and I was given the option to leave my father’s house. I left his house and went to the police station with the office on duty. And when my mother picked me up, I was relieved and the fire inside of me transformed into a brightening star of freedom.

Freedom to my very small family of me and my mother means that we can overcome anything, including generations of abuse within our family and culture. Freedom means that we can live the good old American Dream irrespective of obstacles the world puts forth. Freedom means that with perseverance, dedication, and a positive attitude, we can achieve anything. Dr. Martin Luther King Jr. once said, “Freedom is never voluntarily given … it must be demanded by the oppressed.”

Editor’s note: If you or someone you know is being abused, please seek help. You can call the ChildHelp hotline at 1-800-4-A-CHILD. You can also call the National Domestic Violence Hotline at 1800-799-7233.

How to Manage Your Trauma Reactions by Dr. Janina Scarlet

I am Not a Victim by ATALANTA98

2 thoughts on “Freedom from Abusive Restraints by SK”